In the realm of the Oneiroi 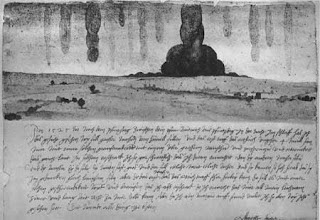 From Christopher Dewdney's Acquainted with the Night (2004):

Night comes when you least expect it. You are making dinner or working late, you look out the window and the sky is already dark. The arrival of night can be elusive, mysterious, and in the city we don't often see it, though we always know when it has fallen. In the country night takes its time. A glorious sunset might flag its approach, yet it seems we can never pinpoint its exact arrival. Nightfall is a subtle process.

On the longest day of the year, it seems good to return, however haphazardly, to dreams; with the night losing, for now, its perpetual battle against the day, the powers of the Oneiroi, sons of Hypnos who serve as the rulers of dreaming, are surely at low ebb.

Besides, I'm going away for a few days to the country on a camping trip, and what better inducement to memorable dreams can there be than a night under stars and true, velvety darkness, the distractions of the city left behind?

it needs pronouncing. To formulate oneself around this hollow, empty sphere . . . To be your breath as it is taken in and shoved out. Then, quietly, it would be as objects placed along the top of a wall: a battery jar, a rusted pulley, shapeless wooden boxes, an open can of axle grease, two lengths of pipe. . . . We see this moment from outside as within. There is no need to offer proof.

I don't actually know whether dream plays a role in Ashbery's writing process, but so often his poetry bears that half-submerged, almost . . . swamp-like quality of a dream, slowed and perhaps logically inexplicable yet organic and right. Proust might argue that it doesn't matter whether dream consciously plays a part. Samuel Beckett explains, in his Proust (1931):

There is no great difference, says Proust, between the memory of a dream and the memory of reality. When the sleeper awakes, this emissary of his habit assures him that his "personality" has not disappeared with his fatigue.

Dream memory, however, necessarily diverges from real memory when we get to the area of prophetic or warning dreams. My favorite of those is a dream from our only known presidential dreamer, Lincoln, a dream so famous that it's simply known as Lincoln's Dream. It comes to us from Lincoln's friend and bodyguard Ward Hill Lamon. In his Recollections of Abraham Lincoln, 1847-1865 (1895) he relates that a few days before his assassination Lincoln told him the following:

About ten days ago, I retired very late. I had been up waiting for important dispatches from the front. I could not have been long in bed when I fell into a slumber, for I was weary. I soon began to dream. There seemed to be a death-like stillness about me. Then I heard subdued sobs, as if a number of people were weeping. I thought I left my bed and wandered downstairs. There the silence was broken by the same pitiful sobbing, but the mourners were invisible. I went from room to room; no living person was in sight, but the same mournful sounds of distress met me as I passed along. I saw light in all the rooms; every object was familiar to me; but where were all the people who were grieving as if their hearts would break? I was puzzled and alarmed. What could be the meaning of all this? Determined to find the cause of a state of things so mysterious and so shocking, I kept on until I arrived at the East Room, which I entered. There I met with a sickening surprise. Before me was a catafalgue on which rested a corpse wrapped in funeral vestments. Around it were stationed soldiers who were acting as guards; and there was a throng of people, gazing mournfully upon the corpse, whose face was covered, others weeping pitifully. 'Who is dead in the White House?' I demanded of one of the soldiers, 'The President,' was his answer; 'he was killed by an assassin.' Then came a loud burst of grief from the crowd, which woke me from my dream. I slept no more that night; and although it was only a dream, I have been strangely annoyed by it ever since.

Even understanding as I do the reasonable questions about the story's veracity--let alone about the purported significance of a man in constant danger dreaming about his death--the chills induced by that dream take me right back to my childhood self, awake in the dark, scared by nightmares. But from Richard N. Current's The Lincoln Nobody Knows (1958), I recently learned of another allegedly prophetic dream ascribed to Lincoln, this one noted by Secretary of the Navy Gideon Welles in his diary:

It occurred on April 14, 1865. That morning Lincoln held a Cabinet meeting, and the occasion was especially dignified by the presence of General Grant, fresh from his victory at Appomattox. The President was hoping for news from General Sherman in North Carolina, where a Confederate army still was in the field. To the Cabinet conferees Lincoln remarked that he had no doubt news soon would come and would be good. For, he said, he had had a dream the previous night. It was a dream he had in advance of almost every important event of the war--always the same dream. In it he "seemed to be moving in some singular, indescribable vessel," and he "was moving with great rapidity towards an indefinite shore."

That night, Lincoln was shot.

I know I risk getting deep into the "And he had a secretary named Kennedy!"-style weeds here, but that dream, too, I find chilling. Yet whereas the first dream, when analyzed, seems a bit too pat, too perfect, this dream is the opposite: it spooks not so much because it seems prophetic as because it seems so vague--so deeply, utterly true to the texture of dream. I can feel the beat of the waves against the bow, see the wisps of cloud and fog obscuring the destination, imagine the odd patience that suffuses the lonely, quiet journey, the way the question of a final destination flits in and out of the dreamer's brain, strongly grasped one moment, lost and forgotten the next.

Imagine if Lincoln had been a lucid dreamer, like the Marquis Leon Hervey de Saint-Denys, who, as Christopher Dewdney explains in Acquainted with the Night, first brought lucid dreaming to widespread attention with his 1867 Dreams and How to Guide Them. Dewdney relates one of the Marquis' stories:

On coming out of a theater, I got into a hackney carriage, which moved off. I woke up almost immediately, without remembering this insignificant vision. I looked at the time on my watch. . . . and after having been completely awake for ten or fifteen minutes, I fell asleep again. It was here that the strange part of the dream began. I dreamed that I woke up in the carriage, which I remembered perfectly well having entered to go home (in the dream). I had the impression that I had dozed off for about a quarter of an hour, but without remembering what thoughts had passed through my mind during that time.

In looking up the Oneiroi, I learned that one of them, Phantasos, whose name means "apparition," appears in dreams as inanimate objects--which would help to explain those occasional dreams people have where ordinary, everyday items are infused with paralyzing horror. But I don't want to lead any readers to that sort of dream tonight, so I'll close with some more John Ashbery, a bit from Flow Chart (1991) wherein the vaguely ominous dream is held in abeyance:

But at times such as
These late ones, a moaning in copper beeches is heard, of regret,
not for what happened, or even for what could conceivably have happened, but
for what never happened and which therefore exists, as dark
and transparent as a dream. A dream from nowhere. A dream
with no place to go, all dressed up with no place to go, that an axe menaces, off and on, throughout eternity.

Sleep well. If you have good dreams, you might send them off to the proprietors of the Annandale Dream Gazette.
Posted by Levi Stahl at 12:28 AM