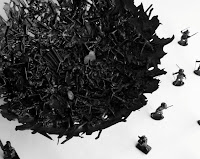 A busy week leaves me with nothing to share this Friday night except a bit more from Aubrey's Brief Lives.

It's from the entry for Captain Carlos Fantom, a mercenary captain of horse who served switched from Cromwell to the King during the Civil War. Asked about the switch, Fantom replied,

He was thought to be indestructible, the result of an incident in which several witnesses watched him defy bullets:

Sir Robert Pye was his Colonel, who shot at him for not returning a horse that he tooke away before the Regiment. This was donne in a field near Bedford, where the Army then was, as they were marching to the relief of Gainsborough. Many are yet living that sawe it. Capt. Hamden was by: The bullets went through his Buff-coat, and Capt. H. sawe his shirt on fire. Capt. Carl. Fantom tooke the Bullets, and sayd he, Sir Rob. Here, take your bullets again. None of the Soldiers would dare to fight with him: they sayd, they would not fight with the Devil.

That's a case where I wish Aubrey had been more clear: did the soldiers not want to fight against Fantom--didn't want to argue or brawl with him, in other words--or did they not want to fight alongside him? The latter seems like an odd reaction: I would think an indestructible comrade would bring a certain rise in morale, unless one fears that bullets follow some law of averages and will find out someone in the company regardless?

Aubrey, always to be relied on in matters supernatural, relates the prevailing theories about Fantom's powers. Fantom reportedly told a friend that

the Keepers in their Forests did know a certain herb, which they gave to Children, which made them to be shott-free (they called them Hard-men.)

Aubrey finds support for the concept in a "Booke of Trialls by Duell in foli (writ by Segar, I thinke)," and in a story from Martin Luther's Commentaries on the First Commandment ("or second Commandment, I thinke the First," continues Aubrey, as usual not troubling with much checking of his sources). A Hard-man, writes Luther, was brought to the court of the Duke of Saxony, where he was

commanded to be shotte with a Musquet: the bullet drop't downe and he had only a blew Spott on his Skin, where he was struck. Martin Luther was then by, and sawe the Bullet drop-downe.

Alas for Fantom, a Hard-man's skin, rumored not to be proof against either a silver bullet or death by cudgel, also turned out not to be immune to the noose: taken up a third and final time for "ravishing" the countryside during the war, he was hanged.