In Monday's post I quoted an amusing bit from Frank Brady's biography of Bobby Fischer, Endgame, about Russian grandmaster David Bronstein. But for some reason Brady didn't describe Bronstein when he made his first appearance, so yesterday, as I made my way through the book, I encountered this:

Bronstein looked like what one might picture a chess player to look like. Bald-pated, with horn-rimmed glasses, and often dressed in a black suit and white shirt, he was actually the prototype of the grandmaster character Kronsteen in the James Bond film From Russia with Love (except that Kronsteen had hair) and the game played on-screen in that film was based on a real one Bronstein had against Spassky.

The photo below, however, makes him look a bit less sinister than that sounds. 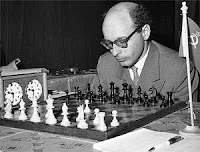 I also really enjoyed this description of one of Fischer's early opponents, Milan Matulovic,

a twenty-three-year-old master who would become infamous in the chess world for sometimes touching a piece, moving it, and then--realizing it was either a blunder or a weak move--returning the piece to its original square, saying, "J'adoube," or "I adjust," and moving it to another square or moving another piece altogether. The "j'adoube" statement is the customary announcement when a player wishes to center or adjust one of his opponent's pieces, but according to the Laws of Chess this must be done before touching the piece, or the mover risks yielding a forfeit. . . . Matulovic "j'adoubed" his pieces after the fact so often that years later he earned the nickname "J'adubovic."

As someone with only a passing knowledge of the chess world, I like this revelation of such an odd quirk--it brings to mind baseball players and their endless variety of tics and rituals, some nearly as irritating as Matulovic's must have been. (I'm looking at you, Nomar.)

Brady's book is a delight overall, full of great scenes and offering as much insight as it seems possible to have into the sad, unpleasant mind of Bobby Fischer. I do wish, however, that there were more actual chess in it. I know that Brady, aiming at a mass audience, had to walk a fine line; a general reader--even one who is picking up a book about Bobby Fischer--can't be assumed to understand the intricacies of chess notation or even the game itself. When Brady tells the stories of key matches, he almost never mentions specific moves: a move is labeled daring, or a blunder, but it's rarely identified. The frustrating thing is that I know it's possible to tell more without getting bogged down. Walter Tevis's brilliant The Queen's Gambit, which tells of a Bobby Fischer–style female prodigy, draws much of its drama from carefully described moments in individual games, and Dorothy Dunnett's harrowing human chess game in Pawn in Frankincense begins and ends with clearly described moves*, such that you can visualize the board position, and thus what's at stake in this game where captured pieces are instantly garroted and Lymond's team is composed of people he loves.

What's strange is that even as Brady seems to deliberately avoid game detail, he nonetheless throws in the occasional term or concept without explanation. He refers to a pair of passed pawns without glossing them, for example, and it isn't until the fifth or sixth time that a game is adjourned partway through that he explains the sealed-move procedure (and he never takes the logical next step of explaining the thinking behind the rule).

I should be clear: these are quibbles, small flaws in a good book. Having pointed them out, it seems only right to end by highlighting one of my favorite parts. It comes in 1960, when Brady had dinner with the seventeen-year-old Fischer in New York, and it's a beautiful account of genius, obsession, and the palpable feeling of watching someone who's working on a different plane from the vast majority of us. Brady asks Fischer how he's going to prepare for an upcoming tournament, and Fischer perks up:

As he talked, he looked from me to the pocket [chess] set, back and forth--at least at first--and spat out a scholarly treatise on his method of preparation. "First of all, I'll look at the games that I can find of all the players, but I'm only really going to prepare for Bronstein. Spassky and Olafsson, I'm not that worried about." He then showed me the progression of his one and only game with Bronstein--a draw from Portoroz two years earlier. He took me through each move the two had made, disparaging a Bronstein choice one moment, lauding another the next. The variety of choices Bobby worked through was dazzling, and overwhelming. In the course of his rapid analysis, he discussed the ramifications of certain variations or tactics, why each would be advisable or not. It was like watching a movie with voice-over narration, but with one great difference: He was manipulating the pieces and speaking so rapidly that it was difficult to connect the moves with his commentary. I just couldn't follow the tumble of ideas behind the real and phantom attacks, the shadow assaults: "He couldn't play there since it would weaken his black squares" . . . "I didn't think of this" . . . "No, was he kidding?" . . . He then began to show me, from memory, game after game--it seemed like dozens--focusing on the openings that Bronstein had played against Bobby's favorite variations. Multiple outcomes leaped from his mind. But he didn't just confine himself to Bronstein's efforts. He also took me on a tour of games that Louis Paulsen had played in the 1800s and Aaron Nimzowitsch had experimented with in the 1920s, as well as others that had been played just weeks before--games gleaned from a Russian newspaper.

All the time Bobby weighed possibilities, suggested alternatives, selected the best lines, discriminated, decided. It was a history lesson and a chess tutorial, but mainly it was an amazing feat of memory. His eyes, slightly glazed, were now fixed on the pocket set, which he gently held open in his left hand, talking to himself, totally unaware of my presence or that he was in a restaurant. His intensity seemed even greater than when he was playing a tournament or match game. His fingers sped by in a blur, and his face showed the slightest of smiles, as if in a reverie. He whispered, barely audibly: "Well, if he plays that . . . I can block his bishop." And then, raising his voice so loud that some of the customers stared: "He won't play that."

I began to weep quietly, aware in that time-suspended moment I was in the presence of genius.

Which brings to mind two things--both reminders, for the pedagogically inclined reading instrumentalists among us (which I don't tend to be) that even adventure fiction offers lessons we can apply later. First is one of the main themes of George R. R. Martin's Song of Ice and Fire, stated most clearly in this scene from A Dance with Dragons:

There is always someone quicker and stronger, Ser Rodrik had once told Jon and Robb. He's the man you want to face in the yard before you need to face his like upon a battlefield.

The second is the most unforgettable moments in Lev Grossman's The Magicians and The Magician King, which are moments when the young wizards--full, as youth will be, of self-confidence and recklessness--are forced to confront the fact that there are powers in the universe, and to those powers they, with all their knowledge and bravado, are but gnats. I used the word harrowing above, so maybe here I'll resort to soul-shaking. In more mundane terms, those scenes, and Brady's account, call to mind that moment--a salutary one, let's be clear--when, at nineteen or twenty, we meet someone who is really, really smart . . . and we are forced to recalibrate everything we think we know about ourselves.

The almost infinitely consoling flip side of that realization is that the universe is capacious enough that rocketlass and I can enjoy playing terrible, blunderous, ridiculous chess together year after year nonetheless.
Posted by Levi Stahl at 9:06 PM