Seduced yet again by Casanova 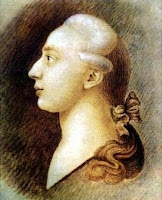 Having cut my teeth in independent retail, I'm about as loyal a customer of my local bookstore, 57th Street Books, as it's possible to be. But loyalty to a store can stand the occasional infidelity . . .and last week in New York I found myself, like a lonely businessman eyeing the lady with the Cosmopolitan and the Blackberry down the bar, casting my eyes over the wares at the lovely little Three Lives and Company.

The infidelity metaphor is appropriate here, for the book I bought--all tarted up by a face-out placement--was Pushkin Press's edition of Stefan Zweig's Casanova: A Study in Self-Portraiture. I've written before of my love of Casanova's memoirs, with their unapologetically hedonistic glimpse into eighteenth-century life, and Zweig nails their appeal:

Imaginative writers rarely have a biography, and men who have biographies are only in exceptional instances able to write them.

Casanova is a splendid, almost unique exception. In him at length we find a man afire with the love of pleasure, a man who plucks at the fleeting hour, grasps at the skirts of happy chance, and is endowed by fate with the most extraordinary adventures; a man with an amazingly good memory, and one whose character knows nothing of inhibitions. This man tells us the tremendous story of his life, tells it without any moral restraints, without poetical adornments, without philosophic embroidery; he gives us a plain, matter-of-fact account of his life as it actually was, passionate, hazardous, rascally, reckless, amusing, vulgar, unseemly, impudent, lascivious, but always tense and unexpected. He is moved to tell his story; not by literary ambition, not by boastfulness or penitence, or an exhibitionist urge toward confession; but by a straightforward desire to tell it. . . . Here the narrator is not a fabulist, an inventor, but the master of poesy of life itself, life whose world is richer than any world of fancy. All Casanova need do is satisfy the most modest of the demands made upon the artist; he must render the almost incredible, credible.

"A straightforward desire to tell it"--yes, that's it. That's the genius of Casanova's memoirs: in an autobiography that is, in a certain sense, the world's biggest brag, the reader never gets the sense that that's how Casanova sees it. Rather, he is infinitely curious, and he expects us to be as well; in fact, his whole bed-to-bed life could be boiled down to an insatiable curiosity. Zweig picks one example out of hundreds, which begins with Casanova rushing to Naples on important business:

At the inn where he has halted for a brief space, he catches sight of a woman in a neighbouring room, in a stranger's bed (that of a Hungarian captain). Nay, what makes the matter more absurd is that he does not yet know whether she was pretty or not, for she is hidden under the bedclothes. He has merely heard laughter, a young woman's laughter, and thereupon his nostrils quiver. He knows nothing about her, whether she is attractive or the reverse, likely to be compliant or not, whether she is a possible conquest at all. Nevertheless he casts aside all his other plans, sends his horses back to the stable, and remains in Parma, merely because this off-chance of a love adventure has turned his head.

Thus does Casanova act in the manner of his kind anywhere and everywhere. By day or by night, in the morning or the evening, he will commit any folly in the hope of spending an hour with an unknown woman.

This is what he lived, and he thinks it might interest us because it interested him. Little to nothing else matters: morality, respectability, religion--what are those next to chances seized, gambles won? He is a mountebank and a cad and a seducer, and he thinks we enjoy reading about his life because of that.

And he's right. If you love the eighteenth century, if you love raconteurs, if you love truly singular personalities, you owe it to yourself to read History of My Life.