Virginia Woolf on Henry James's ghost stories, or, "Surely there are facts enough in the world to go round."

A pleasant discovery I made while reading Martin Scofield’s introduction to The Ghost Stories of Henry James on Wednesday was that Virginia Woolf wrote on that very topic. A few minutes in the library--faced with that endlessly entrancing shelf of the many, many volumes of her letters, diaries, and essays--and I had it before me: a brief piece written for the Times Literary Supplement of December 22, 1921.

In the essay, Woolf makes many of the same points I did in Wednesday’s post, the obvious ones about the fine line between Jamesian inner consciousness and the bodiless manifestations of the supernatural--but as in all her essays, she makes her points in a forthright, clear, and memorable fashion. So she writes, of a relationship that, in James’s story “The Friends of the Friends,” continues after death:

And yet--does it make very much difference? Henry James has only to take the smallest of steps and he is over the border. His characters with their extreme fineness of perception are already half-way out of the body. There is nothing violent in their release. They seem rather to have achieved at last what they have long been attempting--communication without obstacle. But Henry James, after all, kept his ghosts for his ghost stories. Obstacles are essential to The Wings of the Dove. When he removed them by supernatural means as he did in The Friends of the Friends he did so in order to produce a particular effect. The story is very short; there is no time to elaborate the relationship; but the point can be pressed home by a shock. The supernatural is brought in to provide that shock.

Elsewhere, she outlines perfectly how James--and, for that matter, his contemporary Edith Wharton--uses the supernatural most effectively:

Henry James’s ghosts have nothing in common with the violent old ghosts--the blood-stained sea captains, the white horses, the headless ladies of dark lanes and windy commons. They have their origin within us. They are present whenever the significant overflows our powers of expressing it*; whenever the ordinary appears ringed by the strange. The baffling things that are left over, the frightening ones that persist--these are the emotions that he takes, embodies, makes consoling and companionable.

Those are the benefits offered a writer by the supernatural, but Woolf also dwells on the risks. Ann Radcliffe could scare our ancestors with her Mysteries of Udolpho because

they were our ancestors; because they lived with very few books, an occasional post, a newspaper superannuated before it reached them, in the depths of the country or in a town which resembled the more modest of our villages, with long hours to spend sitting over the fire drinking wine by the light of half a dozen candles.

We, on the other hand--and add nearly a century of advances in communication and in horrors to your reckoning as you read this--

breakfast upon a richer feast of horror than served them for a twelvemonth. We are tired of violence; we suspect mystery. Surely, we might say to a writer set upon the supernatural, there are facts enough in the world to go round. . . . Moreover, we are impervious to fear. Your ghosts will only make us laugh, and if you try to express some tender and intimate vision of a world stripped of its hide we shall be forced (and there is nothing more uncomfortable) to look the other way. But writers, if they are worth their salt, never take advice. They always run risks. To admit that the supernatural was used for the last time by Mrs. Radcliffe and that modern nerves are immune from the wonder and terror which ghosts have always inspired would be to throw up the sponge too easily. If the old methods are obsolete, it is the business of a writer to discover new ones. The public can feel again what it has once felt--there can be no doubt about that; only from time to time the point of attack must be changed.

That determination, that confidence in the infinite suppleness and capacity of art to elicit whatever feelings it sets its sights on, makes me appreciate even more the unexpectedly sly humor with which Woolf structured her essay: from that general statement of principles, she moves, story by story, through James’s ghost stories, noting their achievements, deficiencies, and differences (“the enticing game of pinning your author to the board by detecting once more traces of his fineness, his subtlety, whatever his prevailing characteristics may be, is rudely interrupted” by his changes of approach). Then, having convinced herself that James’s ghosts, “remain always a little worldly. We may feel clumsy in their presence but we cannot feel afraid,” she writes,

What does it matter, then, if we do pick up The Turn of the Screw an hour or so before bedtime? After an exquisite entertainment, we shall, if the other stories are to be trusted, end with this fine music in our ears, and sleep the sounder.

Nearly a century later, The Turn of the Screw having lost none of its power, that passage can’t help but make you smile, no? An hour of reading later,

We are afraid of something, perhaps, in ourselves. In short, we turn on the light.

has conquered. That courtly, worldly, sentimental old gentleman can still make us afraid of the dark. 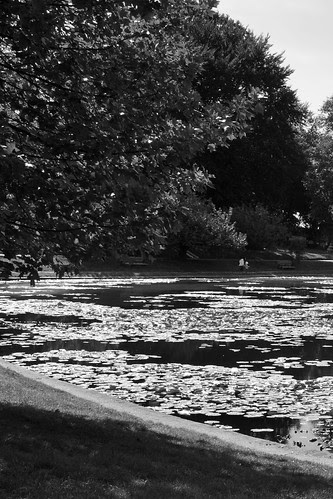 {Photo by rocketlass.}
Posted by Levi Stahl at 9:23 PM