"The licit gratification of certain instincts which we are wont to treat as outlaws," Or, Virginia Woolf on supernatural fiction 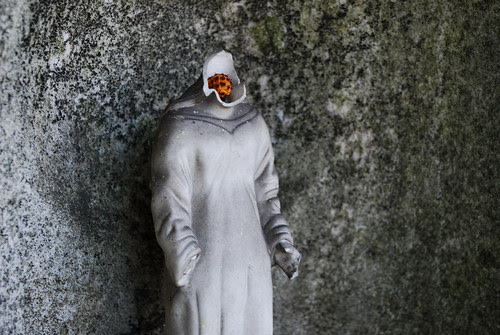 In Volume 1 of Virginia Woolf’s collected essays, her piece on Henry James's ghost stories, about which I wrote last week, is followed by another look at the topic of the supernatural in fiction. It was first published in the TLS a few years before the James essay, on January 31, 1918, as a review of The Supernatural in Modern English Fiction, by Dorothy Scarborough. The broader view taken in this essay allows Woolf to spin out some thoughts on the role of scary stories in general, which, though far from groundbreaking, are worth sharing:

Crude fear, with its anticipation of physical pain or of terrifying uproar, is an undignified and demoralizing sensation, while the mastery of fear only produces a respectable mask of courage, which is of no great interest to ourselves, though it may impose upon others. But the fear which we get from reading ghost stories of the supernatural is a refined and spiritualized essence of fear. It is a fear which we can examine and play with. Far from despising ourselves for being frightened by a ghost story we are proud of this proof of sensibility, and perhaps unconsciously welcome the chance for the licit gratification of certain instincts which we are wont to treat as outlaws.

As in her essay on James, Woolf here is primarily concerned with the fact that the objects of our fears--and the susceptibilities that accompany them--change with time. "Although," she writes, "we are quick to throw away imaginative symbols which have served their turn, the desire persists," then, returning to James, she continues,

If you wish to guess what our ancestors felt when they read The Mysteries of Udolpho you cannot do better than read The Turn of the Screw.

Experiment proves that the new fear resembles the old in producing physical sensations as of erect hair, dilated pupils, rigid muscles, and an intensified perception of sound and movement. But what is it that we are afraid of? We are not afraid of ruins, or moonlight, or ghosts. Indeed, we should be relieved to find that Quint and Miss Jessel are ghosts, but they have neither the substance nor the independent existence of ghosts. The odious creatures are much closer to us than ghosts have ever been. The governess is not so much frightened of htem as of the sudden extension of her own field of perception, which in this case widens to reveal to her the presence all about her her of an unmentionable evil. The appearance of the figures is an illustration, not in itself specially alarming, of a state of mind which is profoundly mysterious and terrifying. . . . The horror of the story comes from the force with which it makes us realize the power that our minds possess for such excursions into the darkness; when certain lights sink or certain barriers are lowered, the ghosts of the mind, untracked desires, indistinct intimations, are seen to be a large company.

One thing that I find interesting in Woolf's analysis is the lack of any acknowledgment of the Great War, which as she wrote was still inexorably mowing down the youth of her generation and driving unprecedented interest in spiritualism. Though she writes that, "the great increase of the psychical ghost story in late years . . . testifies to the fact that our sense of our own ghostliness has much quickened," she never mentions the legions of war dead, or the way that the war's senseless carnage put paid to any number of tidy narratives about king and country, honor and duty, faith and heaven--or the barrier between life and afterlife.

What's perhaps even more interesting is that, nearly a century on, the approach Woolf describes--the psychological approach--remains the preferred form of the ghost story. Even Stephen King, who is never shy about his willingness to go for the gross-out if need be, roots his horror in the everyday, post-Freud fear that we can never fully know our own minds, and that our knee-jerk response to any supernatural manifestation is that we must be going insane, that it just might be a product of our own disturbed consciousness. And despite all the breakthroughs and discoveries of the century just past, science has neither liberated us from such fears nor provided a newer, more convincing bogeyman to replace them; unhappily awake in our beds at 3 a.m., we are all still our own worst nightmares.
Posted by Levi Stahl at 8:06 PM