"The days are short enough now," or, Winter walks with Thoreau 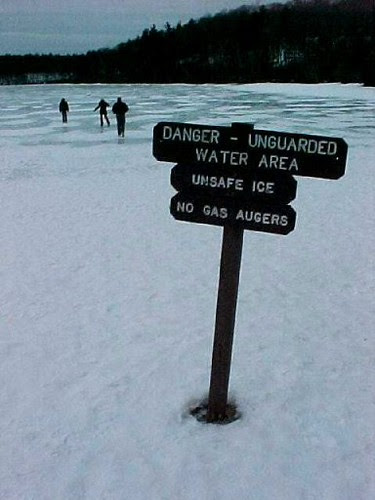 {Photo of Walden Pond in winter by Flickr user Kingdafy. Reproduced under a Creative Commons license; some rights reserved.}

After being tantalized by excerpts all autumn long on A Different Stripe, the blog of the New York Review of Books Classics, I finally got myself a copy of their new edition of selections from Thoreau's journals this week. It couldn't be more suited to dipping into here and there: the entries are rarely more than a couple of pages long, and a few minutes spent with their meditative tone and wide-ranging thoughts are a perfect way to start or end one's day.

Today, as snow and cold put paid to any lingering fantasies of a mild winter, I looked through to see what Thoreau was doing on some long-gone Decembers. And, much as I love snow, I can't say that the first one I found didn't leave me feeling a tad jealous:

Dec. 10, 1853
Another still more glorious day, if possible; Indian-summery even. These are among the finest days in the year, on account of the wholesome bracing coolness and clearness.

Thoreau's invocation of Indian Summer does seem a bit optimistic, however, as he goes on to give more--and specifically more wintry--detail:

Passed in some places between shooting ice-crystals, extending from both sides of the stream. Upon the thinnest black ice-crystals, just cemented, was the appearance of broad fern leaves, or ostrich-plumes, or flat fir trees with branches bent down. The surface was far from even, rather in sharp-edged plaits or folds. The form of the crystals was oftenest that of low, flattish, three-sided pyramids; when the base was very broad the apex was imperfect, with many irregular rosettes of small and perfect pyramids, the largest with bases equal to two or three inches. All this appeared to advantage only while the ice (one twelfth of an inch thick, perhaps) rested on the black water.

What I write about at home I understand so well, comparatively! and I write with such repose and freedom from exaggeration!

Lest you become too jealous of Thoreau's lovely day--or too troubled by your own blustery, frigid one--you should know that a mere two weeks earlier he had been convinced that winter's grip was as solid as it gets:

Nov. 27
Now a man will eat his heart, if ever, now while the earth is bare, barren and cheerless, and we have the coldness of winter without the variety of ice and snow; but methinks the variety and compensation are in the stars now. How bright they are now by contrast with the dark earth! The days are short enough now. The sun is already setting before I have reached the ordinary limit of my walk, but the 21st of next month the day will be shorter still by about twenty-five minutes.

It is too cold to-day to use a paddle; the water freezes on the hand and numbs my fingers.

Before I turn to my fireplace and mulled wine, I'll give you an entry for tomorrow, too, because I can't resist the way this entry combines wildly disparate modes of thought:

Dec. 11, 1858
To Walden. An overcast afternoon and rather warm. The snow on the ground in pastures brings out the warm red in leafy oak woodlands by contrast. These are what Thomson calls "the tawny copse." So that they suggest both shelter and warmth. All browns, indeed, are warmer now than a week ago. How much warmer our woodlands look and are for these withered leaves that still hang on! Without them the woods would be dreary, bleak, and wintry indeed!

A "swirl" applied to leaves suddenly caught up by a sort of whirlwind, is a good word enough, methinks.

Some, being offended, think sharp and satirical things, which yet they are not prepared consciously to utter. But in some unguarded moment these things escape from them, when they are as it were unconscious. They betray their thoughts, as it were by talking in their sleep, for the truth will out, under whatever veil of civility.

That closing meditation makes me wonder what sort of arguments Thoreau had been getting himself into that day!
Posted by Levi Stahl at 5:43 AM