"Whereupon being much affrighted, I fell into an extream sweat . . . " 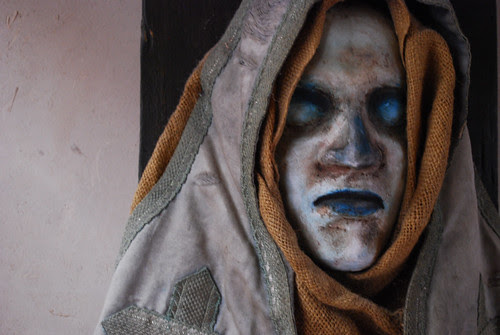 Tonight we'll visit with a few spirits from the fairly distant past, before the fell hands of rationality and scientific exploration began to blight their hidden precincts.

First, a couple of folk tales from the late medieval period that feature ghosts offering comfort to the bereaved that is questionable at best. Here's how Johan Huizinga relates them in his The Autumn of the Middle Ages (1921, translated by Rodney J. Payton and Ulrich Mammitzsch in 1996):

Martial d'Auvergne in his danse macabre of women has the little girl call out to her mother, take care of my doll, my dice, and my beautiful dress! The touching accents of childhood are extraordinarily rare in the literature of the late Middle Ages. . . . When Antoine de la Salle in "Le Reconfort" seeks to comfort a noblewoman over the loss of her little son, he knows no better way to do so than to tell the story of a boy who lost his young life in an even more cruel way; he died as a hostage. He has nothing to offer her to allay her pain other than the lesson of not attaching onself to anything earthly, but then continues with that story we know as the fairy tale of the death shroud. The tale of the dead child who comes to its mother and begs her not to cry anymore in order that its shroud might dry. And here is suddenly a much more tender single note than is heard in the memento mori that is sung with a thousand notes.

Then, to our beloved John Aubrey, whose ever-rewarding Miscellaneous Notes on Various Subjects (1696) includes a whole chapter on apparitions. Aubrey's collection of stories ranges from the briefest of sketches--

Charles the Simple, King of France, as he was hunting in a forest, and lost his company, was frighted to simplicity by an apparition.

--to the richly detailed--

T. M. Esq., an old acquaintance of mine, hath assured me that about a quarter of a year after his first wife's death, as he lay in bed awake with his grand-child, his wife opened the closet-door, and came into the chamber by the bedside, and looked upon him and stooped down and kissed him; her lips were warm, he fancied they would have been cold. He was about to have embraced her, but was afraid it might have done him hurt. When she went from him, he asked her when he should see her again ? she turned about and smiled, but said nothing. The closet door striked as it used to, both at her coming in and going out. He had every night a great coal fire in his chamber, which gave a light as clear almost as a candle. He was hypochondriacal; he married two wives since, the latter end of his life was uneasy.

I love that account: can't you just see T. M. Esq., face shadowed by the flickering of an early autumn fire, clutching Aubrey's sleeve with one hand, the other twined round a wineglass, as he desperately swears--after making sure his current wife isn't in earshot--that this story is true, by god, and help me, Aubrey, help me--what does it mean?

Then there are the doppelgangers, the worst of which appeared to Sir Richard Nepier, MD, of London, who

When [he] was upon the road coming from Bedfordshire, the chamberlain of the inn, shewed him his chamber, the doctor saw a dead man lying upon the bed; he looked more wistly and saw it was himself: he was then well enough in health.

Good health he may have had, but you all know enough about doppelgangers to see what's coming next:

He went forward in his journey to Mr. Steward's in Berkshire, and there died. This account I have in a letter from Elias Ashmole, Esq. They were intimate friends.

My favorite of Aubrey's ghosts, however, is one of the simplest:

Anno 1670, not far from Cirencester, was an apparition: being demanded, whether a good spirit or a bad? returned no answer, but disappeared with a curious perfume and most melodious twang. Mr. W. Lilly believes it was a fairy.

"A curious perfume" and a "melodious twang"? I think absence of minor chords and mephitic stenches are enough all by themselves to group a ghost with the good, don't you?
Posted by Levi Stahl at 5:20 AM