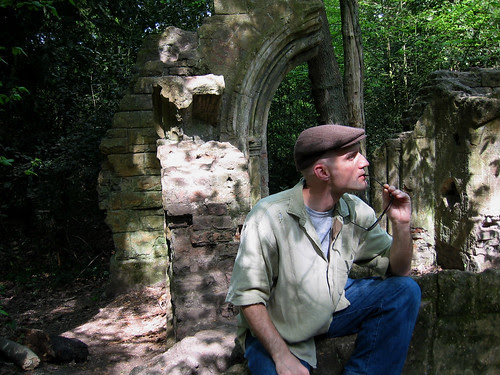 {I pose for an author fauxto in a folly somewhere in England. Photo by rocketlass.}

A couple of weeks ago, I shared a few passages from First Childhood (1934), a volume of memoirs by Lord Berners, the eccentric English composer, writer, and painter, and I promised to share some of the amusing scenes from Mark Amory's splendid biography, Lord Berners: The Last Eccentric (1998). One of my favorites concerns what must surely be Berners's most ridiculous achievement: the building of the last traditional folly in England, in 1935.

Amory writes, "The struggle to achieve his whim was long and fierce and included much comedy." A county governing body initially refused Berners permission to build the tower, even once he offered to scale back its height to 100 feet, writing in their report that the

"fail to see the object or benefit of the tower, if erected," which is reasonable enough. As Berners himself said, "The great point of the Tower is that it will be entirely useless."

But that was far from the end of the story. Berners appealed, and the planning committee's back-and-forth was paralleled by a discussion in the local paper, including a letter from nearby resident

Vivian Lobb . . . saying that Lord Berners planned to install a siren that could be heard from twenty-five miles away and would go off every two hours to waken the sick and dying.

Eventually Berners got his way--most likely to no one's surprise, given his wealth and position--and the tower was built, complete with the following warning above its entrance:

Members of the Public committing suicide from this tower do so at their own risk.

The tower was square, brick, and incongruously gothic, with a wooden staircase and lots of arched windows in its high-level rooms; a viewing platform surrounded by a stone parapet crowned the folly, offering an impressive view of the countryside.

Berners celebrated the opening of the tower with a party, which

was a great success, with splendid fireworks more than making up for the logn walk to and from the house on a cold evening. Guests were allowed up to six effigies of enemies to be burned on the bonfire; this was deemed "most inadequate."

That last probably gives as succinct a sense as possible of the Berners wit, the same wit that animates the work of Nancy Mitford, the letters of Evelyn Waugh, and even the melancholy reflections of Cyril Connolly; as wearying as it might have been to have lived in the milieu that generated it, reading about it all these years later is nothing but pleasure.
Posted by Levi Stahl at 9:35 PM