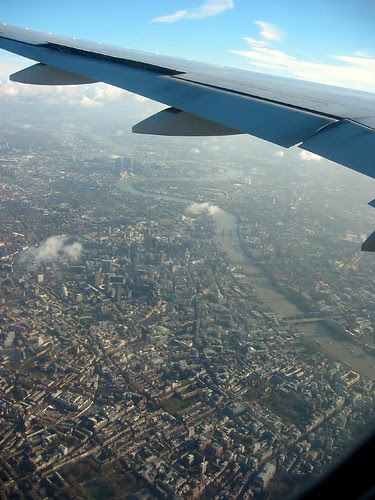 Some wonderful descriptions in Nick Laird's new novel Glover's Mistake (2009) have me wishing I were visiting my friends there right now. First, this prospect, from the steps of the National Gallery:

The rain had eased but not stopped, and the vista from the portico was still uniquely uninspiring: London done by Whistler, arranged in black and grey. Ragged, pewter clouds turned on Nelson's head, so that he alone was all that held the heavens up. Lutyens's limestone fountains were blown to spray and rain danced on the surface of their pools.

Dismal, yes, but seductive nonetheless to us hopeless lovers of London. Later, Laird describes a "wet, dark, inteminable Wednesday, one of those winter days that lacks an afternoon"--such a familiar London feeling.

Then there's this picture from Millennium Bridge, looking out over the river to the north:

The view from the bridge was spectacular. The restive black river, slicing through the city, granted new perspectives. The buildings on the other side were Lego-sized, those far squiggles of trees on the Embankment walk. Even though Larry and the taxi driver were waiting, Ruth stopped for a second to inspect the night, and stood gripping the rail. The normal sense of being in a London street, of trailing along a canyon floor, was replaced by the thrill of horizons. The sky was granted a depth of field by satellites, a few sparse stars, aircraft sinking into Heathrow.

Laird has it just right: what the Thames offers is an escape from the warren, an imposition of proper scale on the city that is all too often visible only piecemeal. I always get a similar feeling from a climb to the top of the Monument or a glimpse north from the hills of Sydenham or Crystal Palace, a reminder that the city nestles in the Thames valley, and everything runs down to the river, as Alan Moore describes in Iain Sinclair's strange, compelling collection, London: Book of Disappearances (2006):

Black on silver-dusted black the hill pokes up its positive yang terminal into the night's electrolyte, played across the centuries with urban dream in a metallic rind. Seabed before the ice age, residues of fossil night-sweat crown the tumulus, a cradle-cap of gravel sheltering the clay and chalk beneath while all around wore down to lowland, marine aeons half-remembered still in seaside decors that incongruously dot the closes and steep lanes. Its sickle-shaped mass crystal-shot with Selemites Rhomboidalis, Shooters Hill is dreaming London, dreaming London up: low on its northern slop a chalk fault that collapsed creating the Thames valley, gouging out a life-sump for the Neolithic swill to fill, the pallid Morlock scrum, chalk-mining chavs blowing their barter on bone bling in settlements at Plumstead, Woolwich, barnacled below the sleeping hills' north flank.

As fighter jets roar overhead here in Chicago in preparation for this weekend's Air and Water Show, I think wistfully of being in London instead, finding quiet along the Thames, my favorite place to find peace there, aside from the Sunday-morning emptiness of the City.

Virginia Woolf, on the other hand, makes a case for the city's graveyards, in The London Scene:

The only peaceful places in the whole city are perhaps those old graveyards which have become gardens and playgrounds. The tombstones no longer serve to mark the graves, but line the walls with their white tablets. Here and there a finely sculptured tomb plays the part of garden ornament. . . . Here one might drowse away the first days of spring or the last days of autumn without feeling too keenly the stir of youth or the sadness of old age. For here the dead sleep in peaces, proving nothing, testifying nothing, claiming nothing save that we shall enjoy the peace that their old bones provide for us.

Perhaps the Thames was simply not to Woolf's liking, or perhaps it was still too busy a highway for commerce in her day; much as I love the river, it's hard to argue with Woolf's contention that "These garden graveyards are the most peaceful of our London sanctuaries and their dead the quietest." Would that I were there.
Posted by Levi Stahl at 11:08 AM