"Mr. Hardy was of medium height and figure . . . his expression placid rather than sad." 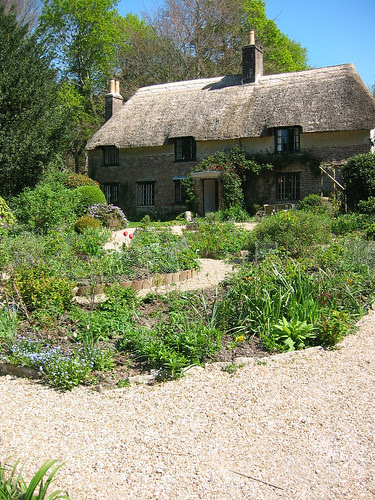 Earlier this week I raved about the many pleasures to be found in The New Oxford Book of Literary Anecdotes (2007), offering a couple of examples from the entry for Lord Byron, whose life spun off enough rich anecdotes to fill a personal Decameron.

It would seem wrong, however, to close discussion of the book without also turning to another of this blog's favorite preoccupations, Thomas Hardy; fortunately, the volume doesn't disappoint when it comes to Dorchester's greatest export. First, we learn that Hardy had something unexpected in common with Vladimir Nabokov: both were synesthetes, as Elliot Felkin's "Days with Thomas Hardy" (published in Encounter in 1962) reveals:

He went on to talk about days of the week and colours and associations. Monday was colourless, and Tuesday a little less colourless, and Wednesday was blue--"this sort of blue" pointing to an imitation Sevres plate--and Thursday is darker blue, and Friday is dark blue, and Saturday is yellow, and Sunday is always red.

And Tess fans can't help but marvel at this story, told by Hardy's second wife, Florence, in her The Later Years of Thomas Hardy (1930), of a hospital visit to Hardy's friend Lord Pembroke:

He [Pembroke] was now ill at a nursing home in London, and an amusing incident occurred while his visitor was sitting by his bedside one afternoon, thinking what havoc of good material it was that such a fine and handsome man should be prostrated. He whispered to Hardy that there was a "Tess" in the establishment, who always came if he rang at that time of day, and that he would do so then that Hardy might see her. He accordingly rang, whereupon Tess's chronicler was much disappointed at the result; but endeavoured to discern beauty in the very indifferent figure who responded, and at last persuaded himself that he could do so. When she had gone the patient apologized, saying that for the first time since he had lain there a stranger had attended to his summons.

The New Oxford Book of Literary Anecdotes includes a handful of additional Hardy stories, all good--but really nothing can touch the trove that is Thomas Hardy Remembered (2007), edited by Martin Ray. A compilation of firsthand accounts of Hardy by both the well- and the little-known, it offers page after fascinating page of sheer pleasure for the Hardy fan. Sure, it costs £55 (which, until John McCain unsuspends the suspension of the suspension of his campaign and flat-out superheros this economic crisis, is something like $1,000,000,000.34), but where else are you going to find such a collection of Hardy anecdotes?

Hell, I would argue that this one from Augustus John's Chiaroscuro: Fragments of Autobiography (1952) is worth nearly £55 on its own, if for no other reason than the vehemence of Hardy's protest:

Thomas Hardy had good reason to view with anxiety the demonstrations of some of his admirers. One of these, hailing from the USA, on the strength of a few minutes interview, produced a book entitled Thomas Hardy's Universe [Ernest Brennecke, 1952--ed.], in which the poet was described as soliloquizing before the fire, while smoking a succession of cigarettes. "But," said Hardy, with a gesture of despair, "I have never smoked a cigarette in my life!"

Or this nuanced appraisal from Edmund Gosse's obituary of Hardy in the Sunday Times of January 15, 1928:

[Hardy] needed all the natural magic of his genius to prevent his work, interpenetrated as it was by this resigned and hopeless melancholy, from becoming sterile, but joy streamed into it from other sources--the joy of observation, of sympathy, of humour. Yet, after all, the core of Hardy's genius was austere and tragical, and this has to be taken into consideration, and weighed in every estimation of his writings. It was a curious fact, and difficult to explain, that this obvious aspect of his temperament was the one which he firmly refused to contemplate. The author of Tess of the d'Urbervilles conceived himself to be an optimist.

Or, returning to Tess, this account of authorial travails from Frank A. Hedgcock's "Reminiscences of Thomas Hardy" (published in the National and English Review of October 1951):

He thought that public opinion was probably right in regarding it as his best novel; but he had put too much feeling into it to recall it with pleasure.

However, my favorite of Hardy's references to Tess (aside, that is, from this one) comes from Desmond MacCarthy's "Thomas Hardy: The Writer" (published in the BBC magazine The Listener on June 6, 1940). For its sheer disingenuousness, this anecdote alone is definitely worth £55, exchange rates be damned:

Once when we were passing some spot in Tess he said to me, "If I had thought that story was going to be such a success, I'd have made it a really good book."

Methinks a re-read of Tess may be on my autumn calendar. 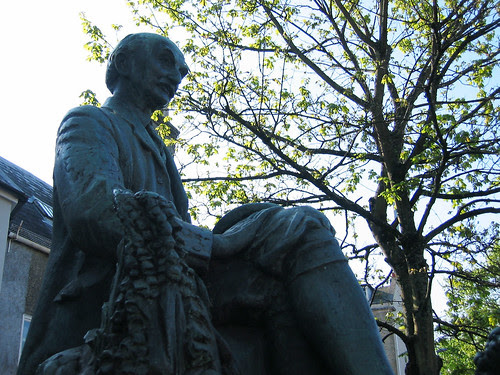 {Photo by rocketlass.}
Posted by Levi Stahl at 6:16 PM