A brief sojourn in lit-nerd heaven . . . with Edgar Allan Poe 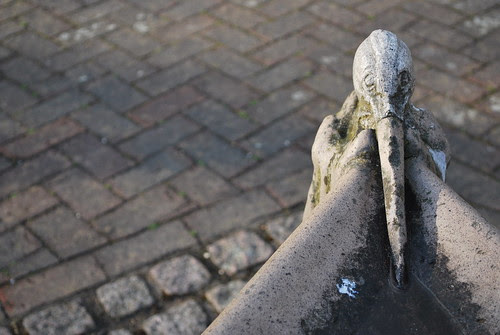 Being someone who fully admits to (oh, let's be honest--revels in) being about as lit-nerdy as you can get without assuming the stifling purposefulness of academia . . . how on earth did I not know that The New Oxford Book of Literary Anecdotes (2007) existed until I saw its forthcoming paperback edition listed in Oxford University Press's Fall catalog?

Seriously, can you think of anything that would be more up my alley, aside perhaps from The Anthony Powell Guide to Anthony Powell and Friends, with Digressions on Proust and Richard Stark? Gossip, biography, literary opinions, goofiness, gossip--what more could I want? Unwilling to wait for the paperback to be published, I ordered a copy of the hardcover posthaste; the first entry I happened to turn to, on Edgar Allan Poe, did not disappoint.

The Poe section is drawn largely from Jeffrey Meyers's Edgar Allan Poe: His Life and Legacy (1992), and anyone who, like me, spent significant portions of their childhood terrified by Poe's dark visions can surely take a grim pleasure from this first selection:

The superstitious skeptic, who could be terrified by his own imagination, later confessed to the editor George Graham that "he disliked the dark, and was rarely out at night. On one occasion he said to me, 'I believe that demons take advantage of the night to mislead the unwary--although, you know,' he added, 'I don't believe in them.'"

Even more fun is this entry, which presents a dialogue recalled by Joel Benton between Poe and poet William Ross Wallace on the streets of New York, shortly after Poe had completed "The Raven":

"Wallace," said Poe, "I have just written the greatest poem that ever was written."

"Have you?" said Wallace. "That is a fine achievement."

Thereupon Poe began to read the soon-to-be famous verses in his best way--which . . . was always an impressive and captivating way. When he had finished it he turned to Wallace for his approval of them--when Wallace said:

"Fine?" said Poe, contemptuously. "Is that all you can say for this poem? I tell you it's the greatest poem that was ever written."

I don't know what strikes me more in this exchange, the thought of Poe reading "The Raven" aloud in his "impressive and captivating way"--what that must have been like!--or the circumspect calm of Wallace's "Have you? That is a fine achievement." I deeply admire that degree of unflappability.

My favorite of the entries on Poe, however, is this one, also taken from Meyers, if for no other reason than that it inescapably calls to mind one of Poe's most prominent fans, Jorge Luis Borges:

It was extremely ironic that the author of the article on "Whirlpool" in the ninth edition of the Encyclopedia Britannica gave Poe credit for information that Poe had lifted from an earlier edition of the same Encyclopedia [for his story "A Descent into the Maelstrom"], and then quoted as facts the parts of the story that Poe himself had invented.

Having invoked Borges, I can't help but end with the unforgettable epitaph to Poe that he offered up, relatively casually, at the close of an introduction he wrote for an edition of Melville's "Bartleby the Scrivener":

Vast populations, towering cities, erroneous and clamorous publicity, have conspired to make unknown great men one of America's traditions. Edgar Allan Poe was one of these; so was Melville.

Clamorous my support of The New Oxford Book of Literary Anecdotes may be; erroneous I promise you it is not. I'll have more to share from it in the coming months, I'm sure.
Posted by Levi Stahl at 9:15 PM