Let's wallow in the overripe and baroque for a bit, shall we?

At the library the other day in search of a volume of Aubrey Beardsley's letters, I stumbled across a book on Aubrey from 1928 by a friend and near-contemporary, Haldane McFall. The title page, below, will give you a sense of the lush production of this volume, redolent of an earlier, more bountiful age of publishing. 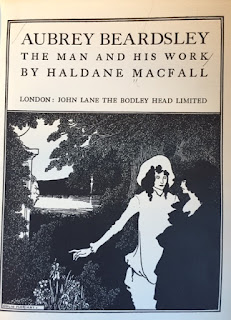 I'm sure I won't do anything more than dip into the book--for what genre holds up less well than instant biography? But I thought you might appreciate the breathless, dramatic tone of McFall's foreword nonetheless. Here's how he opens the book:

About the mid-July of 1894, a bust of Keats had been unveiled in Hampstead Church--the gift of the American admirers of the dead poet, who had been born to a livery-stable keeper at the Swan and Hoop on the Pavement at Finsbury a hundred years gone by--and there had foregathered within the church on the hill for the occasion the literary and artistic world of the 'nineties. As the congregation came pouring pitof the church doors, a slender, gaunt young man broke away from the throng, and, hurrying across the graveyard, stumbled and lurched awkwardly over the green mounds of the sleeping dead. This stooping, dandified being was evidently intent on taking a short-cut out of God's acre. There was something strangely fantastic in the ungainly efforts at a dignified wayfaring over the mound-encumbered ground by the loose-limbed, lank figure so immaculately dressed in black cut-away coat and silk hat, who carried his lemon-yellow kid gloves in his long white hands, his lean wrist showing naked beyond his cuffs, his pallid, cadaverous face grimly set on avoiding falling over the embarrassing mounds that tripped his feet. He took off his hat to some lady who called to him, showing his "tortoiseshell" coloured hair, smoothed down and plastered over his forehead in a "quiff" almost to his eyes--then he stumbled on again. He stooped and stumbled so much and so awkwardly amongst the sleeping dead that I judged him short-sighted; but was mistaken--he was fighting for breath. It was Aubrey Beardsley.

Not a bad way to begin a biography, no?

The decadent atmosphere of the '90s emerges more clearly in the prose of the end of the foreword:

We ought to realise that even as Beardsley, by light of his candles, wrought his art, the skeleton leered like an evil ghoul out of the shadows of his room. . . . Beardsley knew he was a doomed man even on the threshold of manhood; and he strove with feverish intensity to get a lifetime into each twelve-month. He knew that for him there would be few to-morrows--he knew that he had little to which to look forward, and had best live his life to-day. And he lived it like one possessed. 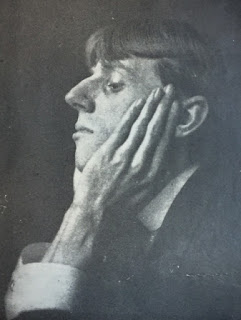 The letters, meanwhile, seem, on quick perusal, to be mostly depressing: Beardsley refers constantly to his coughs and hemorrhages, to the extent that you find yourself giving thanks for the tuberculosis vaccine. But once in a while there's a detail that calls the era to life, like this one, from a letter to Andre Raffalovich of March 18, 1897:

You have never told me, dear Andre, of the progress of your hand, and how long black silk bandages were necessary.

What was the injury? Did it heal? Who knows? But what better image of the darker, night-time life of the 1890s could we have than that of an injured hand bandaged not with cotton or wool, but with pure black silk?
Posted by Levi Stahl at 1:00 PM