One of the highlights of my and rocketlass's holiday in England last fall was a trip to Rye to see Lamb House, where Henry James settled happily (at least in Jamesian terms) for the final years of his life. It turned out to be a lovely, fairly modest house with a large, beautiful garden hiding behind it, walled off from prying eyes and feeling both welcoming and secretive. 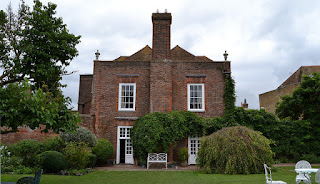 What I'd forgotten until we arrived at the house was that it also later was the home of E. F. Benson. I knew Benson through his ghost stories, classic old-style ghost stories that carried the feel of Victorian England into the Edwardian era and beyond. Lamb House, however, is known not for being haunted, but for being repurposed by Benson as Mallards in his much-loved Lucia novels.

As I discovered in reading my first of those, Mapp and Lucia (1935), this weekend, having been to Rye helps. Oh, I'm sure readers who haven't can imagine both Mallards and the town of Tilling into being with sufficient clarity, but having walked the steep, narrow, cobbled streets, I took particular pleasure in the many instances of Rolls Royces being forced to back and fill multiple times in order to convey people to and return them from a destination a hundred yards or so away. And when Mapp spied into the secret garden from the top of the church tower, I could easily imagine her sense of illicit access, having availed myself of the very same view. 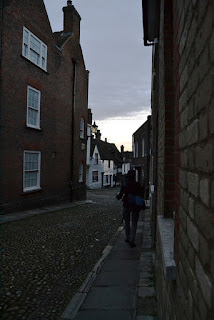 Mapp and Lucia tells the story of an invasion and conquest--a social one. Lucia, bored with life in her own town, decamps for the summer to Tilling. Within days, she's launched an all-out assault on the social primacy of the woman from whom she's rented Mallards, Mrs. Mapp, and the book follows their battle over the course of several months. It's gentle comedy, more rooted in situations and characters than in, say, Compton-Burnett–style cutting lines, or Wauvian perfection of prose, but Benson nonetheless turns in some memorable lines:


She loves being ridiculous, dear thing; it's a complex with her.

There comes a tide in the affairs of men which, if you don't nip it in the bud, leads on to boredom.

It was always wise to be polite to mimics. . . . the dreadful gift of mimicry, which was a very low weapon, but formidable.

With a view to being more manly he poured himself out a very small whisky and soda.

Elizabeth carried up to bed with her quantities of food for thought and lay munching it till a very late hour.

What makes the book a great pleasure, even at times enchanting, however, is Benson's light, borderline whimsical inventiveness. Take this exchange, between Lucia and Quaint Irene, the local artist:


Irene rose to more daring conceptions yet. One night she had dined on a pot of strawberry jam and half a pint of very potent cocktails, because she wanted her eye for colour to be at its keenest round about eleven o'clock when the moon would rise over the marsh, and she hoped to put the lid forever on Whistler's naive old-fashioned attempts to paint moonlight. After this salubrious meal she had come round to Mallards, waiting for the moon to rise and sat for half an hour at Lucia's piano, striking random chords, and asking Lucia what colour they were. These musical rainbows suggested a wonderful idea, and she shut down the piano with a splendid purple bang.

"Darling, I've got a new scheme for Grebe," she said. "I want you to furnish a room sideways, if you know what I mean."

"Why, like this," said Irene very thoughtfully. "You would open the door of the room and find you were walking about on wallpaper with pictures hanging on it. (I'll do the pictures for you.) Then one side of the room where the window is would be whitewashed as if it was a ceiling and the window would be the skylight. The opposite side would be the floor; and you would have the furniture screwed on to it. The other walls, including the one that would be the ceiling in an ordinary room, would be covered with wallpaper and more pictures and a bookcase. It would all be sideways, you see: you'd enter through the wall, and the room would be at right angles to you; ceiling on the left, floor on the right, or vice versa. It would give you a perfectly new perception of the world. You would see everything from a new angle, which is what we want so much in life nowadays. Don't you think so?"

Irene's speech was distinct and clear cut, she walked up and down the garden-room with a firm unwavering step, and Lucia put from her the uneasy suspicion that her dinner had gone to her head.

"It would be most delightful," she said, "but slightly too experimental for me."

"And then, you see," continued Irene, "how useful it would be if somebody tipsy came in. It would make him sober at once, for tipsy people see everything crooked, and so your sideways room, being crooked, would appear to him straight, and so he would be himself again. Just like that."

"That would be splendid," said Lucia, "but I can't provide a room where tipsy people could be sober again. The house isn't big enough."

Beyond the basic concept, a couple of moments make that passage for me. It's the "splendid purple bang," casually thrown in; the fact that as Irene lays out her idea, she does so "thoughtfully"; and that Lucia midway through convinces herself drink isn't the problem, only to have Irene immediately turn to the room's beneficial effects on the drunk. (Which we all agree to eye with skepticism, surely?)

If that passage amuses you, it's worth giving Mapp and Lucia a try. Benson's account of this all-out war for the smallest of social stakes was the perfect novel for bridging my week in London and the subsequent long weekend with tomorrow's re-entry into humdrum office life. I recommend you gather your lapcats and tea and settle in.
Posted by Levi Stahl at 9:37 PM