Off, off, off with their heads! 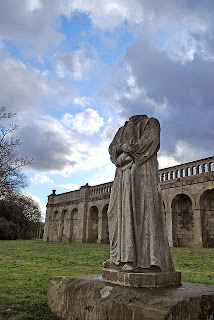 On the recommendation of the polymath Steve Donoghue, I recently read Jean Plaidy's novel of Mary, Queen of Scots, Royal Road to Fotheringay(1955), and its closing scene reminded me of two things:

1. That the execution of Mary, Queen of Scots was a bizarre event, featuring details no fiction writer would dare invent.

2. That execution by axe was a particularly troublesome and difficult method of administering capital punishment.

Here's how Plaidy tells the story of Mary's end, in the hall at Fotheringay at the end of years of imprisonment. By all accounts, Mary met her death with courage, and a dignity that the event itself could not come up to:


Bulle, the executioner, hesitated. This was his trade; his victim had forgiven him, knowing this; yet never before had he been called upon to wield the axe for one who affected him so deeply with her grace and dignity.

Every eye in the hall was upon him. He faltered. He dealt a blow. There was a gasp from the watchers, for the axe had slipped and though the blood of Mary Stuart gushed forth, she was merely wounded.

Trembling, Bulle again raised his axe; but his nerve was affected. Again he struck, and again he failed to complete his work.

It was with the third stroke that he severed the Queen's head from her body.

Then he grasped the beautiful chestnut hair, crying: "God save Queen Elizabeth! So perish all her enemies!"

But the head had rolled on to the bloodstained cloth which covered the scaffold, and it was a wig which the executioner held up before him.

There was silence in the hall as all eyes turned to the head with the cropped grey hair--the head of a woman grown old in captivity.

Though the history of executions is gruesome, it's hard to imagine much more ghastly than those botched attempts topped by the final indignity of the wig held aloft. Yet even that wasn't the strangest moment:


And as they watched, they saw a movement beneath the red velvet petticoat, and Mary's little Skye terrier, who unnoticed had followed his mistress into the hall, ran to the head and crouched beside it, whimpering.

It's one of those moments that both makes history come palpably alive and makes its figures seem fully human: Mary loved her dog, and her dog loved her, and death was necessarily a mystery to both.

While Mary's end is gruesome, others condemned to the axe over the centuries had it far worse. In Severed, Frances Larson runs through some horrible examples with chilling matter-of-factness:


Alcohol may have fortified the mind [of the executioner], but it certainly did not steady the hand, and no doubt it only added to the executioner's problems. One common excuse for failure was that the executioner had seen the condemned man's head double before him, and "therefore did not know which of the two was the real one." There are stories of swords slicing through jaws and axes hacking into shoulder blades and skulls, and of it taking two, three, five, even twenty attempts to dispatch the poor soul on the scaffold. It took three blows to sever the head of Mary, Queen of Scots in 1587, and many more in 1541 to kill Margaret Pole, Countess of Salisbury, who defied her fate by refusing to place her neck on the block.

Thinking of Margaret Pole's defiance beggars my imagination: even if I try to think myself into the frenzied state that surely would accompany the knowledge that I was about to (unjustly, I would assume) be killed, I can't imagine finding the courage to refuse the easier route at that moment, to force a more painful and gory death as a point of honor. It's astonishing. (Even Samuel Johnson wasn't quite able to feel confident about how he might approach the moment of execution, telling Boswell, "I know not whether I should wish to have a friend by me, or have it all between God and myself.")

Larson notes that these problems arise primarily because it is very hard to sever a human head with a single blow from a blade. But she also tells us that executioners received more than regret from their employment:


Despite the demands of the job, or perhaps because of them, when beheadings went well they could bring an executioner great distinction. From the mid-sixteenth century, wealthier European executioners hired assistants, who administered minor punishments, but the job of beheading people was always reserved for the master. Myths grew up around executioners and people told stories about their magical powers. It was said that they could recover lost children or stolen goods, that they could exorcise evil spirits and cure diseases with their touch, and that the swords in the executioner's house rattled whenever a person was condemned to death. There was the story of an executioner who had decapitated a standing man so fast that the only visible mark on the dead man's body was a thin stripe of blood around his neck.

That last reminds me of how Hilary Mantel in Bring Up the Bodies, without making Anne Boylen's death overly gruesome, nonetheless makes us feel the horror of it, and how powerfully Cromwell, who has reluctantly engineered the execution, feels it, too:


The queen is alone now, as alone as she has ever been in her life. . . . She raises one arm, again her fingers go to the coif, and he thinks, put your arm down, for God's sake put your arm down, and he could not will it more if--the executioner calls out sharply, "Get me the sword." The blinded head whips around. The man is behind Anne, she is misdirected, she does not sense him. There is a groan, one single sound, from the whole crowd. Then a silence, and into that silence, a sharp sigh or a sound like a whistle through a keyhole: the body exsanguinates, and its flat little presence becomes a puddle of gore.

The sound of the sword, the "flat little presence"--it's hard to read that passage and not shiver.

I wonder whether the condemned ever haunted the executioners? Larson's book offers no reports of ghosts, and I suppose that makes sense: surely from whatever realm a ghost might descend, she would have sufficient perspective to see, not the hand that wielded the blade, but the more blameful hand that signed the order, and thus had more fully earned a haunting.

I ask the question because when it's entirely possible that the very first thing I knew about English history when I was a kid was that Anne Boylen was said to haunt the Tower. The more I learn about her life and death and the manner of dying of the period, the more I understand. If I were her, I'd haunt Henry and his descendants down through eternity.
Posted by Levi Stahl at 1:09 PM