An announcement and a call for help--Or, When the man sat down at the typewriter . . . 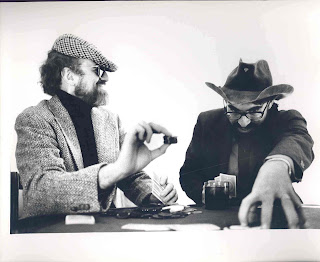 {Donald E. Westlake loses to Brian Garfield at the storied Mysterious Bookshop floating poetry game sometime in the early 1970s. Photographer unknown. For more about that game, see my interview with Garfield on the University of Chicago Press blog.}

Donald E. Westlake opened most of his Parker novels with a sentence that began with the word "when." You can read them all at  the Miskatonic University Press site, but the best of them definitely comes from Firebreak: "When the phone rang, Parker was in the garage, killing a man."

For a lot of writers, that means taking up any job that comes along: book reviews, features, essays, forewords--any old thing that will help an editor fill a hole and bring in a check. Westlake, however, always kept his focus relentlessly on his fiction, so when he did turn to nonfiction, you can be confident he was taking on a subject he cared about.

Which leads me to today's bit of good news: I've just signed a contract with the University of Chicago Press (my employer when I'm wearing my publicist's hat) to edit a volume of Donald Westlake's nonfiction--a celebratory miscellany, sort of like the wonderful Charles Portis volume that was published last year.

The plans are still at a very early stage, but what we're envisioning is a volume that would bring together the best of Westlake's nonfiction, including reviews, essays on favorite writers, magazine pieces, occasional writings, and more. In addition, it would likely include a couple of the most interesting interviews he sat for over the years; a piece or two by prominent fans, friends, and critics about Westlake and his work; and possibly even letters and e-mails. The goal is to give Westlake's large and ever-growing fanbase insight into how his inquisitive, inventive, alert mind worked over questions of genre, form, talent, and more--helping us to see the man behind the books we've all loved for so many years.

I'm already making great use of a small cadre of Parker-fan advisers who have helped me through the years as Chicago has republished that series, but I also could use help from the fan community at large: if you know of any Westlake nonfiction pieces that you even suspect I may not have heard of--anything that's all obscure, or old, or forgotten--I'd love it if you'd drop me a note or leave a comment below. I'll be doing some digging in libraries and archives, so I hope I'll be able to find plenty of good material in addition to what I already have, but I also am well aware that the crime fiction community is incredibly knowledgeable, and I would be grateful for any tips or thoughts folks are willing to share.

I'm sure you'll be hearing more about this from me in the months to come--and I hope you're as excited as I am!
Posted by Levi Stahl at 12:14 PM