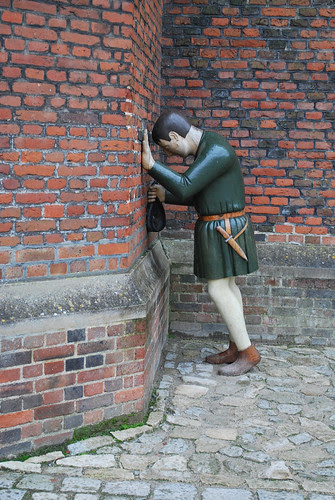 I'm going to use the fact that the New York Review of Books blog has recently been running a series of posts on dreams--a topic that longtime readers know is dear to my heart--as an excuse to share a dream from last week. Today's NYRB post is from Tim Parks, who writes of his many dreams about water and says that "It is impossible not to wish to interpret or somehow understand intense dreams." Well, there's a very simple interpretation of the dream I'm going to share today: I've read A Dance to the Music of Time too many times.

The experience of duality is common to dreams, possibly even fundamental. A person is a stranger, yet also your cousin. An object is ordinary, yet also horrifying. While it's impossible to convey the full experience of a dream--impossible even to retain it for long ourselves--I can tell you one thing about a lot of my dreams: they're simultaneously something I'm experiencing and something I'm reading. The dream world, for me, is often made of words.

That was definitely the case with the dream I'm about to describe. While I'm sure that a substantial amount of accuracy has been lost to the transition to the waking, typing world, what follows are, to the best of my ability to recall them, the actual words I remember from my dream as it unfolded, simultaneously events in space and words on a page:

Tired from the hours of sleep lost to preparation for the day's exercises, I hoped to pass the General's door unnoticed, but the fates, busy, one might reasonably suppose, in the larger theater of war, were not with me. "Captain Jenkins," came the call from the office. "Captain Jenkins!"

I took the minimum number of steps into the office that military etiquette required. "Yes, sir?"

"I've been going over the map for today's exercise, and I've discovered something."

Was he proud? Chagrined? Sleeplessness was not helping me to read what hid beneath his graying guardsman's mustache. "Yes, sir?"

"Thirty-seven! But I'm so used to fifty . . . and it's such a solid number! So . . . we're just going to say it's fifty nonetheless. We'll be doing fifty miles today, Captain--but fifty short miles. I doubt the men will mind." Stroking his mustache, the Generale lowered his head and chuckled quietly to himself as he folded his map, clearly amused by the ever-reliable reactions of the enlisted man through history. "No, no, I doubt the men will mind a short mile or two."

Labels: A Dance to the Music of Time, Anthony Powell, dreams