Aspiration, reading, the 1950s, and the death of Dave Brubeck

I go see the Cubs play at Wrigley Field twenty-five or so times every summer. I always carry my shoulder bag, it's always full of books, and approximately every other time a member of the security staff riffles through it he'll jokingly say something like, "Now don't be doing your homework in there!"

When we had our condo on the market for a while a few years back, we pulled the books off our dozen bookcases and boxed them up at the behest of our realtor. He explained that, like any superfluous furniture or decorations, the books would be too distracting, drawing the attention of prospective buyers who should, instead, be thinking about how nice their stuff would look in the space.

I suspect, though, books are more than distracting to the average prospective buyer--that they're actually a bit deflating, unsettling. All serious readers have had guests ask the incredulous (and well-meaning but completely uncomprehending) question, "Have you really read all these?" For someone who's not a reader, I suspect that the sight of so many books calls forth memories of school, and pressure. Like the security guard, they associate them with homework. Not, our realtor would surely point out, what you'd think of as a buying mood.

Longtime readers will already know the pithiest description of the problem of books for the unbookish, from Anthony Powell's The Valley of Bones:


Books are unconvertible assets, to be passed on only to those who possess them already.

It's not exactly like what I imagine it must be to have true religious belief and try to convince others of its value, but I suspect it's at least distant kin.

In Frederik Pohl and C. M. Kornbluth's The Space Merchants (1953), a sci-fi novel set in a future where citizens are known as "consumers" and advertising rules the world, an ad man who has wormed his way into a conservationist conspiracy finds himself unexpectedly in a conspirator's personal library:


I was conscious of Herrera's eyes on me, and I don't think I showed any of what I felt. I even stayed with him for an hour or so, while he devoured a wormy copy of something called Moby-Dick and I glanced through half a dozen ancient magazines. Some of those remembered classics went a long way toward easing my conscience--there was actually an early "Do You Make These Common Mistakes in English?" and a very fine "Not a Cough in a Carload" that would have looked well on the wall of my office. . . . But I could not relax in the presence of so many books without a word of advertising in them. I am not a prude about solitary pleasures when they serve a useful purpose. But my tolerance has limits.

In Iron Curtain: The Crushing of Eastern Europe, 1944–1956, Anne Applebaum notes that in the wave of arrests that followed the Soviet entrance into Hungary at the end of World War II, significant numbers of people were arrested simply because they owned books.

I'm listening to Dave Brubeck tonight. He died today, a day short of his 92nd birthday. One of his earliest, most successful albums was named Jazz Goes to College (1953).

The linking of jazz and college--and the intellectually and culturally aspirational quality of that linkage--seems inescapably tied to that era, the postwar years and especially the 1950s. This was the period that saw Sinatra graduate from bowling over teens to singing for adults, when Nat King Cole could host a TV show, when a generation of veterans was emerging from college--courtesy of the GI Bill, which also send Brubeck to college--and finally, dammit, getting to truly begin their adult lives. Brute force had been turned back, and the years ahead would be the realm of the educated, the civilized, the cultured and calm. Adlai Stevenson was a presidential candidate, for God's sake.

The 1950s were the time of The Mentor Philosophers. Of, for better or worse, Hugh Hefner's certainty that mixing smart fiction with the naked ladies would lessen the shame. Of, probably for worse, the birth of Reader's Digest condensed books. Of, definitely for worse, Immanuel Velikovsky as a best-seller. Books, and by extension ideas, were still seen as essential parts of the cultured life--and the cultured life was seen as an essential part of the adult life.

In Frank: The Voice (2010), James Kaplan writes about Frank Sinatra's voracious reading at the start of the 1950s, as his career and marriage had both just crashed and burned. Frank, writes Kaplan,


kept reading. His nose was always in some tome or other, especially when he was flying (which was often). And there were a lot of good books to read in late 1951. There was John Hersey's Hiroshima and The Diary of Anne Frank and John Gunther's big book about the United States and Churchill's and Eisenhower's memoirs and Kon-Tiki by Thor Heyerdahl and The Caine Mutiny. Then somebody gave him a great big doorstop of a novel called From Here to Eternity, James Jones's scathing postwar portrait of the prewar U.S. Army. Once Frank started reading it, he couldn't put it down.

Sinatra, Kaplan explains, became obsessed with the character of Maggio--and with the idea that he should play him in the soon-to-be-cast film version:


Now he was spending sleepless nights worrying about his career, taking downers and uppers, reading obsessively at From Here to Eternity, dog-earing pages, marking up the Maggio sections.

Frank Sinatra, an ill-educated hard worker from Hoboken, was obsessed with James Jones and his 864-page novel.

From Here to Eternity holds up remarkably well, I think--far better than Robert Gottlieb suggests in his recent New York Review of Books essay about Jones. Jones's language can at times be overly (and ineffectively) arty, but there's never a sense that he's pulling his punches or dumbing things down. It was a serious reckoning with what we'd just learned from sending millions of young men through the machine designed to produce warriors--and it was an instant best-seller. And a favorite of Frank.

Frank wasn't alone, of course. Marilyn Monroe, for example, was also a reader. The volume of her notes, letters, and other occasional jottings that was published a few years ago established that the photos of her reading Ulysses and Leaves of Grass weren't fakes--like Frank, she was committed to the idea of improving her intellect, and doing so through books.

I've quoted the following passage from Rex Stout's "Fourth of July Picnic" (1958) before, but it's apt. It's a description by Nero Wolfe's right-hand man, Archie Goodwin, of their ace operative Saul Panzer's apartment:


Saul Panzer, below average in size but miles above it in savvy, lived alone on the top floor--living room, bedroom, kitchenette, and bath--of a remodeled house on Thirty-eighth Street between Lexington and Third. The living room was big, lighted with two floor lamps and two table lamps, even at seven o'clock of a July evening, because the blinds were drawn. One wall had windows, another was solid with books, and the other two had pictures and shelves that were cluttered with everything from chunks of minerals to walrus tusks. In the far corner was a grand piano.

Bookshelves. A piano. In the apartment of a private detective. Oh, 1958.

There's a serious risk of sounding like an under-forty Andy Rooney in saying this, but I'll go ahead: it's nearly inconceivable that major stars would strive so openly today, right? The culture has changed; books have been dislodged. Philosophy and novels are for undergrads of questionable hygiene rather than for the shelves of the den. Other things distract our magpie gaze; sophistication--called by other names--uses other measurements.

I'm an unashamedly casual jazz fans. I love Sinatra and a large group of vocal jazz (and pop) singers, but my knowledge of actual jazz beyond that, while not nothing, is fairly limited, not ranging much beyond what, speaking as I did earlier of Playboy, that magazine recommended as a method oh so long ago: get an album by Miles Davis, then one by each of his sidemen, then one by each of their sidemen, ad infinitum. I can listen to Bill Evans for days, and lament my own inability.


But what jazz unquestionably was, when I first dove in as a rural sixteen-year-old with eyes set far away, was aspirational and intellectual. It was part of what it might mean to go to college, to live in a city, to change and grow beyond what the limits of my tiny town would allow. And Dave Brubeck was a big part of that. For a precocious sixteen-year-old there's still nothing quite like working out the insane time signatures of the songs on Take Five. Jazz said elsewhere, and knowledge, and adult life.

Any time I write about the past, I want to be clear that I wouldn't want to live there. To brutalize Faulkner's lines, the golden age isn't over; it wasn't even golden. One reason people have long admired Dave Brubeck is that he ran an integrated band--and threatened, seriously, to cancel concerts when venues complained. The very fact that he had to take that stand should be enough to convince us that the 1950s were no golden age. But for those of us who love books, who work and live with books, there's unquestionably an aspect of it to pine for, a largely lost mainstream that, after an inconceivably destructive world war, was looking for answers--and thought they might be found in books.

When we took our condo off the market, we had friends over, poured some martinis, and with the assistance of both reshelved the books until 2 in the morning. We only reassembled ten of our twelve bookcases, however. My new piano needed the rest of the space. 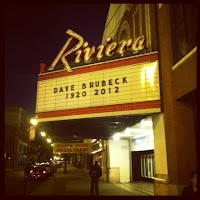