Jews, legends of the, carefully indexed 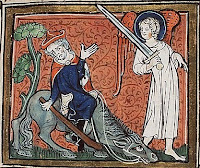 A week or so ago, I mentioned what a pleasure it’s been, now that our books have been freed from boxes and restored to their proper places on our shelves, to dip into favorite books--in particular, books that I’d long been used to grabbing for a few minutes’ pleasurable browsing but had been unable to employ for that purpose for nearly a year now.

One of the ones I’ve been most enjoying being reunited with this week is the Johns Hopkins University Press’s seven-volume edition of Louis Ginzberg’s Legends of the Jews (1938). It’s not a book I’ve ever felt inclined to try to read straight through--that seems too daunting even for someone as relatively untroubled by length as I am. Rather, it’s for opening more or less at random, safe in the knowledge that you’ll always find some bizarre and fascinating tale.

Today, I opened it to some stories of Solomon. Like this one, which starts with a book--the book, I suppose--tattling on him to God:

When Solomon in his wealth and prosperity grew unmindful of his God, and, contrary to the injunctions laid down for kings in the Torah, multiplied wives until himself, and craved the possession of many horses and much gold, the Book of Deuteronomy stepped before God and said: “Lo, O Lord of the World, Solomon is seeking to remove a Yod from out of me, for Thou didst write: ‘‘The king shall not multiply horses unto himself, nor shall he multiply wives to himself, neither shall he greatly multiply to himself silver and gold’; but Solomon has acquired many horses, many wives, and much silver and gold.” 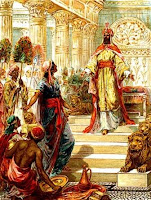 Which, understandably, irks the Lord, leading him to get Solomon entangled with the demon Asmodeus, who went to heaven every day,

to take part in the discussions in the heavenly academy. Thence he would descend again to earth in order to be present, though invisible, at the debates in the earthly houses of learning.

Solomon captures Asmodeus rather easily, but then he lets his curiosity get the best of him:

One day the king told Asmodeus that he did not understand wherein the greatness of the demons lay, if their kin could be kept in bonds by a mortal. Asmodeus replied, that if Solomon would remove his chains and lend him the magic ring, he woudl prove his own greatness. Solomon agreed. The demon stood before him with one wing touching heaven and the other reaching to the earth. Snatching up Solomon, who had parted with his protecting ring, he flung him four hundred parasangs away from Jerusalem, and then palmed himself off as the king.

Note to self: Don’t free demons from chains on request. And if you do free them, at least don’t also give them your magic ring. Solomon does eventually make it back to his throne, after a bit of Haroun-al-Rashid-like incognito wandering, while Asmodeus is eventually tripped up by complaints from Solomon's mother, Bathsheba, and his wives, that

the behavior of the king had completely changed--it was not befitting royalty and in no respect like Solomon’s former manner.

Displaying tact, the tale gives no further detail.
The best part of the seven volumes, however, is not actually the legends themselves: it’s the insanely comprehensive index that takes up the whole of the seventh volume! Almost any page offers a litany of references and sub-references that in themselves are so remarkably detailed that you can’t help but smile. Here’s one example: Balaam and his talking ass, who play a part in Numbers. The ass only figures in two entries, though the second is surprising, at least to those of us most familiar with Balaam’s ass from Wodehouse’s regular mentions of it:

Balaam himself goes on to figure in another sixty-three entries! One of which, “Balaam, the vices of,” does, as one might expect, cross-reference to "Balaam committed sodomy with his ass.”

The entry for “Plague” is much shorter, though perhaps more rich in the pleasures offered by the fractured syntax of the index style. I’ll leave out the page numbers here and just give you the finely delineated entries:

Plague, Reuben afflicted with the,

Plague, a punishment for adultery,

Plague visited Israel in the desert,

Plague raged in Palestine during the visit of the spies,

Plague, incense a remedy against the,

Plague, Phinehas’ attempt to ward off,

Plague destroyed the tribe of Simon,

Plague, inflicted on the Philistines,

Plague, the punishment for taking a census,

Plague in the time of David, the cause and duration of,

Plague, Cain afflicted with a new one, each century,

Plague, the Angel of Death traverses the world with one stroke in the time of,

Plague struck the Gentiles who refused to permit the disinterment of Ezra,

How can any bookish type not marvel at that list, and at the obsessive dedication that went into its making?

{Also: am I alone in feeling bad for Cain here?I know he did wrong, but good god, isn’t being “cursed from the earth” and told that “when thou tillest the ground, it shall not henceforth yield unto thee her strength; a fugitive and a vagabond shalt thou be in the earth” a pretty harsh punishment without the surprise addition of a new and different plague each century?}
Posted by Levi Stahl at 5:48 AM