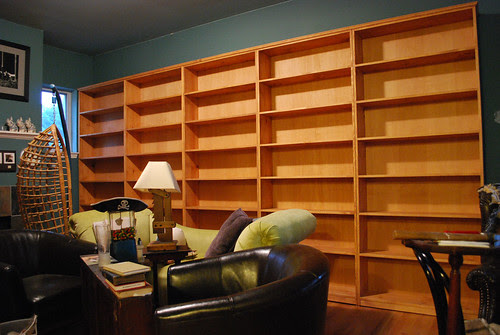 From The Library at Night (2006), by Alberto Manguel

Like Machiavelli, I often sit among my books at night. While I prefer to write in the morning, at night I enjoy reading in the thick silence, when triangles of light from the reading lamps split my library shelves in two. Above, the high rows of books vanish into darkness; below sits the privileged section of the illuminated titles. This arbitrary division, which grants certain books a glowing presence and relegates others to the shadows, is superseded by another order, which owes its existence merely to what I can remember. My library has no catalogue; having placed the books on the shelves myself, I generally know their position by recalling the library's layout, and areas of light or darkness make little difference to my exploring. The remembered order follows a pattern in my mind, the shape and division of the library, rather as a stargazer connects in narrative patterns the pinpoints of the stars; but the library in turn reflects the configuration of my mind, its distant astrologer. The deliberate yet random order of the shelves, the choice of subject matters, the intimate history of each book's survival, the traces of certain times and certain places left between the pages, all point to a particular reader. A keen observer might be able to tell who I am from a tattered copy of the poems of Blas de Otero, the number of volumes by Robert Louis Stevenson, the large section devoted to detective stories, the minuscule section devoted to literary theory, the fact that there is much Plato and very little Aristotle on my shelves. Every library is autobiographical.

At the urging of our sympathetic but insistent realtor, rocketlass and I have spent the past week packing up and storing away nearly all of our books. Back in the autumn, when we first put the condominium in which we've lived for ten years on the market, we packed away a couple of bookcases worth of books that had been kept in one of the bedrooms, but we had hoped that we would sell before having to give up the rest.
Alas, four months and seventy boxes later, we now have a home that is, by our standards, denuded of books. Our living room is bare, and our realtor was right: it does look much larger. It also looks significantly less like home--which I suppose is the idea, after all: the less it looks like our home, the sooner it will no longer be, and the sooner we'll be able to re-establish our library in what we both hope, the gods willing, will be its final destination.

Of course, compared to our neighbors, for whom reading is an occasional way to pass the time rather than one of life's central activities, we still have a lot of books in our small apartment: one seven-shelf case, tucked away in a bedroom. It's a desert island case, I suppose, though not exactly, its holdings an atypical distillation of our vanished collection, a mix of the unread, the forever re-read, and the inexhaustible--from all of Anthony Powell to the letters of Byron to The Anatomy of Melancholy to Boswell's Johnson to Sherlock Holmes and the latest from Hard Case Crime. There's no reason it shouldn't be enough to get us through the next few months, though I'm already dreading the first time I need to look something up in a book that's been consigned to storage.

I take heart, however, from a passage found elsewhere in The Library at Night, a reminder that things could be much, much worse:

On one of the early days of October of the year 1659, Robinson Crusoe returned to the mangled remains of his craft and managed to bring ashore a number of tools and various kinds of food, as well as "several things of less value," such as pens, ink, paper and a small collection of books. Of these books, a few were in Portuguese, a couple were "Popish prayer-books" and three were "very good Bibles." His "dreadful deliverance" had left him terrified of death through starvation, but once the tools and the food had met his material needs he was ready to seek entertainment from the ship's meagre store of books. Robinson Crusoe was the founder--if a reluctant founder--of a new society. And Daniel Defoe, his author, thought it necessary that at the beginning of a new society there should be books.

Manguel's book resides in our remaining bookcase; Defoe's, readily available elsewhere, has been relegated to the ship's hold. (Did I mention that for all my carping in this post, we live half a block from an actual library? Okay, I'll admit it's not exactly the salt mines here . . . ) 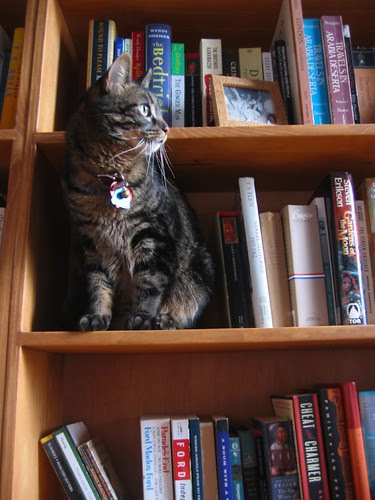