"Great poets / foretell their own deaths in a single line"; I, instead, use up several on trifles 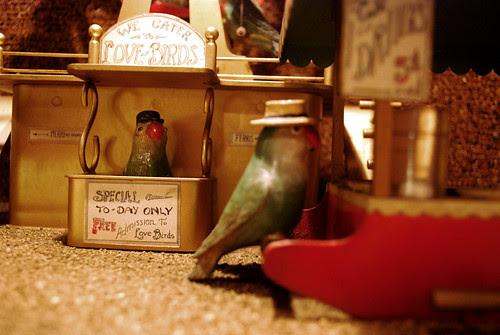 The morning's snow is but a memory, the clouds that brought it now on their way to New York, leaving us with a cold sliver of moon . . . and what's that it illuminates? Oh, no--it's that lazy columnist's friend and succor . . . the Notes Column! Like a Rod Blagojevich press conference, this post is unlikely to offer any coherent theme or defense of its existence, but it might quote some poetry!

It's been months since I've resorted to one of these; how about this time rather than a numbered list, I tart the blog up as if it were a gossip column?

ITEM! I ventured to Chicago's Harold Washington Library on Monday to pick up some supplementary volumes for a review that is due now. {Note the italics. They're to remind me of what I ought to be doing right now rather than assembling this list. They're not, you'll note, working.}

I easily found the books I was after, but when I laid them on the circulation desk I hit a snag: according to the librarian, one of the volumes I had handed him, The Selected Poems of Tomaž Šalamun (1988), didn't exist. Or at least it didn't exist in their system; despite what the computer asserted, the physical book did to all eyes appear to be right there in hand.

I'm familiar with the frustration of looking on a library shelf for a missing book that the system assures you is there, but this was my first experience with its opposite. Could this be some tendril of the Invisible Library infecting an actual library?

ITEM! Speaking of looking for books on shelves: anyone who has ever worked in a bookshop has experienced the dreadful moment when, as you search the shelves in vain for a book requested by a customer, you realize that the customer looming at your elbow is the author of the book in question, attempting in a decreasingly subtle way to determine whether his fears of irrelevance and disregard are quite justified. It is a singularly awkward situation, for which the only remedy is the white lie, a suddenly recovered memory of the satisfied customer who left the store mere moments ago, beaming with joy, day made because you'd sold her that very book. You're sure you'll have another copy in any day now, in anticipation of another such customer.

We amused ourselves, while we waited there, at a Bookseller's shop, where Mrs Thrale enquired if they had got the Book she had recommended to them. "Yes, Ma'am," was the answer; "and it's always out--the Ladies like it vastly." 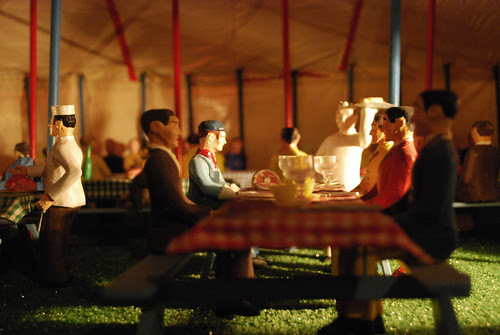 ITEM! Speaking of the Invisible Library: this blog has been remarkably free lately of writing about that master of invisible book creation, Roberto Bolaño. My mind, on the other hand, has not: nearly five months after I read it, 2666 still staggers around in my thoughts. If you're having the same problem, you might as well go read what I think might be the best review of the novel yet, Sam Sacks's at Open Letters Monthly. More than anyone else I've read, Stark assembles a coherent argument about the book's aims, starting with this proposition:

But it must be reemphasized that, with one significant exception that I’ll look into later, every character, every occurrence, and every development of this book is brought into existence for the purpose of being negated. Nothingness is the single connecting motif of the five disparate sections, and it doesn’t bind them so much as drape across them like a shroud.

His overall assessment is a more harsh than mine, but it is forceful and convincing, one of the few writings on 2666 that I'm confident will stay with me and inform my eventual rereading of the novel.

Bolaño fans should also check out the appreciative review of his collection of poetry, The Romantic Dogs, that Ed Pavlic (author of the exceptionally good prose poem collection Winners Have Yet to Be Announced: A Song for Donny Hathaway) wrote for Verse. Pavlic opens with a quotation from the fragments of Empedocles that reads like an uncanny anticipation of Bolaño's fictions:

I shall tell thee a twofold tale. At one time it grew to be one only out of many; at another, it divided up to be many instead of one. There is a double becoming of perishable things and a double passing away. The coming together of all things brings one generation into being and destroys it; the other grows up and is scattered as things become divided. And these things never cease continually changing places, at one time all uniting in one through Love, at another each borne in different directions by the repulsion of Strife.

The Romantic Dogs has mostly been drowned out by the hubbub surrounding 2666, but Pavlic makes a good case for why it's worth taking a look at.

ITEM! Way back in June when I read The Savage Detectives, I unexpectedly found myself comparing the young, horny, violent infrerealists of Bolaño's Mexico City to Giacomo Casanova. Casanova's wonderfully amoral twelve-volume History of My Life frequently finds him reciting poetry, but always in an instrumental fashion: poetry is a marker of his refinement and sensibility, one of many tools that he uses in his neverending quest to get into women's pants. There is never a sense, as Casanova is recounting his recitation of a poem, of a poem truly affecting him; the reader--or at least the contemporary reader--gets the sense that he would have used whatever was to hand, that if knowing obscure facts about CC Sabathia or Dungeons and Dragons would have pitter-patted the hearts of the ladies, he would have been just as happy to deploy those.

The infrarealists, on the other hand, while they certainly do use poetry as an aphrodisiac (part of the overly masculine atmosphere of the early part of the novel that would have turned me off were Bolaño's prose not so captivating). At the same time, however, Bolaño makes us believe that poetry also is a crucial part of their self-definition, and even their way of understanding the world. Of all the poses to adopt, they've chosen a relatively marginalized one, and the enthusiasm and vigor with which they enact it--especially late in the novel when the youngest of them, Garcia Madero, reveals an encylopedic knowledge of poetic form--is bracing. Poetry is an instrument for these young men, but it's not solely or merely an instrument; its roots and its effects run far deeper.

ITEM! Which reminds me: I promised you some poetry, didn't I? How about this, which Melville includes in the "Extracts" assembled by a "poor," "hopeless, sallow" sub-sub-librarian with which he opens Moby-Dick--and which thus, almost Ouroborically, brings us back to where we started, with libraries:

Leviathan maketh a path to shine after him;
One would think the deep to be hoary.

It's from Job, which I believe Blagojevich has yet to quote--but fear not, Rod! There's still time to work it in! 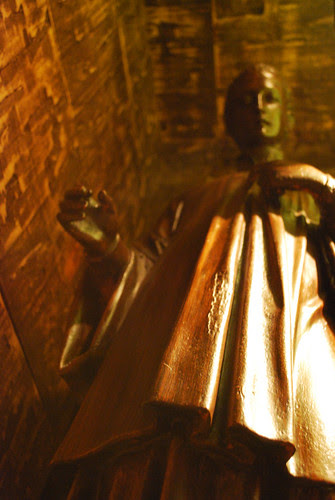