"He was committed to the tactical clarity of eradicating mystery," or, Finding the right crime novel

Feeling a bit drained by my most recent immersion in the world of Anthony Powell's A Dance to the Music of Time, what I need now is the literary equivalent of a snack--something I can gleefully, heartily enjoy in a single sitting. I find myself in the deplorable state of having no unread Parker novels in the house, but I do have a small stack of recent Hard Case Crime novels to choose from. Time to try some opening lines.

First up is The First Quarry (2008), by Max Allan Collins, which relates the origin of Collins's hit man anti-hero. The first line:

The night after Christmas, and all through the house, it was colder than fuck.

About as hard-boiled as you can get, no? And with bonus swearing. But I recently read (and enjoyed) Lawrence Block's Hit and Run (2008), about his hit man anti-hero John Keller, and though I've never really considered the question before, a one-hit-man-novel-per-month rule seems reasonable.

Opening a crime novel with vicious dialogue is a solid move. In this case it's particularly good, because those of us who've read the first two Bruen and Starr black comedies know that the line is being addressed to the odious, ridiculous Max Fisher, a small-time hood with destructive delusions of grandeur--who when last we saw him was on his way to federal prison. But as much brutal, disreputable fun as The Max promises, I'm not sure that it's right to follow Anthony Powell's dry wit with Bruen and Starr's grotesquerie.

How Barney came to occupy a room on the wrong side of management in a hostage hotel deep inside Mexico City had to do with his friend Carl Ledbetter and one of those scary phone calls that come not always in the middle of the night, but whenever you are most asleep and foggy.

Aha. That's the one: the sentence that grabs you by the collar and drags you along, ignoring your protests, until it's finished with you. I think this is what I was looking for.

Mere pages later, we get this passage:

Now, rate your friends, your acquaintances and your intimates. Among that group you already know which person you'd ask for help when shady badstuff rears up in your life. Yeah, that one--the person you always suspected was a bit illicit, a hair violent, two baby steps beyond the law. After-hours help, a less-than-kosher midnight run, some muscle, maybe some payback, and you know the person you'd call when quiet society says you should be calling a cop.

So who would I call? If I needed helpers for a stylish heist, I'd call rocketlass and Carrie, no question. 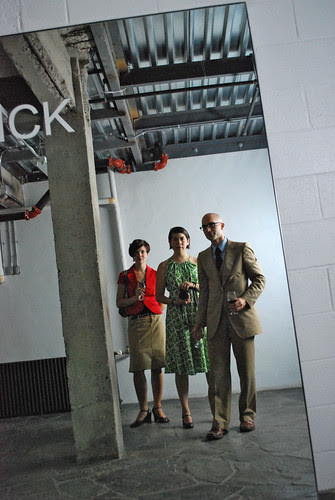 But as a fixer for the sort of dangerous mess Schow's describing, one's wife would seem to be categorically excluded from consideration, so rocketlass is out. Should I call Tony? Bob? Ed? Amy?

Oh, what am I saying? I need to try to strike up a friendship with this guy.
Posted by Levi Stahl at 10:56 PM