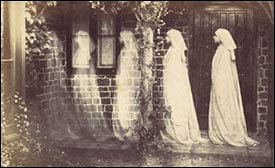 {"The Ghost of Bernadette Soubirous," photographer unknown, circa 1890}

Too busy to do any real posting today, but in keeping with the Hallowe'en theme, how about a couple of warnings . . . (cue scary organ music) . . . of impending Death!

The first warning wouldn't have actually been all that helpful, taking as it did the form of barking. It's a memory of a story Thomas Hardy told publisher Sir Newton Flower, collected in Thomas Hardy Remembered (2007), edited by Martin Ray:

Here is an odd thing about [Hardy's dog] Wessex. One November night, William Watkins, who founded the Society of Dorset Men in London, went to call on Hardy after dinner, as was his custom whenever he was in Dorset. It was a night of wild storm. This is Hardy's story of the episode to me:

"For some reason Wessex rushed wildly round the house, growling and barking. He dashed at the front door; then came back again. Watkins and I opened the door, and Wessex ran out into the storm, still barking. I thought there might be marauders about, but we could find nobody. We came in; we got Wessex in. An hour later, Watkins, after a final cup of coffee, went back to his hotel in Dorchester, and died in his bed that night. What did Wessex know?"

Far creepier--though just as impossible to verify--is Alec Guinness's story, from Blessings in Disguise (1985), of meeting James Dean in Los Angeles; as with so many other stories this week, I owe D. J. Enright for including this one in his Oxford Book of the Supernatural:

[O]n the way back to the restaurante he turned into a car-park, saying, "I'd like to show you something." Among the other cars there was what looked like a large, shiny, silver parcel wrapped in cellophane and tied with ribbon. "It's just been delivered," he said, with bursting pride. "I haven't even driven it yet." The sports-car looked sinister to me, although it had a large bunch of red carnations resting on the bonnet. "How fast is it?" I asked. "She'll do a hundred and fifty," he replied. Exhausted, hungry, feeling a little ill-tempered in spite of Dean's kindness, I heard myself saying in a voice I could hardly recognize as my own, "Please, never get in it." I looked at my watch. "It is now ten o'clock, Friday the 23rd of September, 1955. If you get in that car you will be found dead in it by this time next week." He laughed. "Oh, shucks! Don't be so mean!" I apologized for what I said, explaining it was lack of sleep and food. . . . We parted an hour later, full of smiles. No further reference was made to the wrapped-up car. . . . In my heart I was uneasy--with myself. At four o'clock on the afternoon of the following Friday James Dean was dead, killed while driving the car.

A sinister, deadly automobile--sounds like a topic for Stephen King, whose appearance at Fenway Park recently was responsible for this week's delving into the ghostly in the first place.

I'll bring the week of Hallowe'en postings to close--for now!--with a passage from M. R. James's "A School Story." What's great about the passage is that you don't even need to know its context to enjoy the dread that grows through this account of a night visitation:

"I didn't hear anything at all," he said, "but about five minutes before I woke you I found myself looking out of this window here, and there was a man sitting or kneeling on Sampson's window-sill and looking in, and I thought he was beckoning." "What sort of man?" McLeod wriggled. "I don't know," he said, "but I can tell you one thing--he was beastly thin: and he looked as if he was wet all over: and," he said, looking round and whispering as if he hardly liked to hear himself, "I'm not at all sure that he was alive."

In such cases, I recommend that one err on the side of assuming that the creepy stranger is, in fact, not alive.

Finally, for those of you who are bored at work: a Google search on "I don't believe in ghosts, but" is guaranteed to keep you entertained for many an hour. It even led me to a great line supposedly from Edgar Allan Poe, which, though the attribution appears sketchy, does seem apt:

I don't believe in ghosts, but I've been running from them all my life.